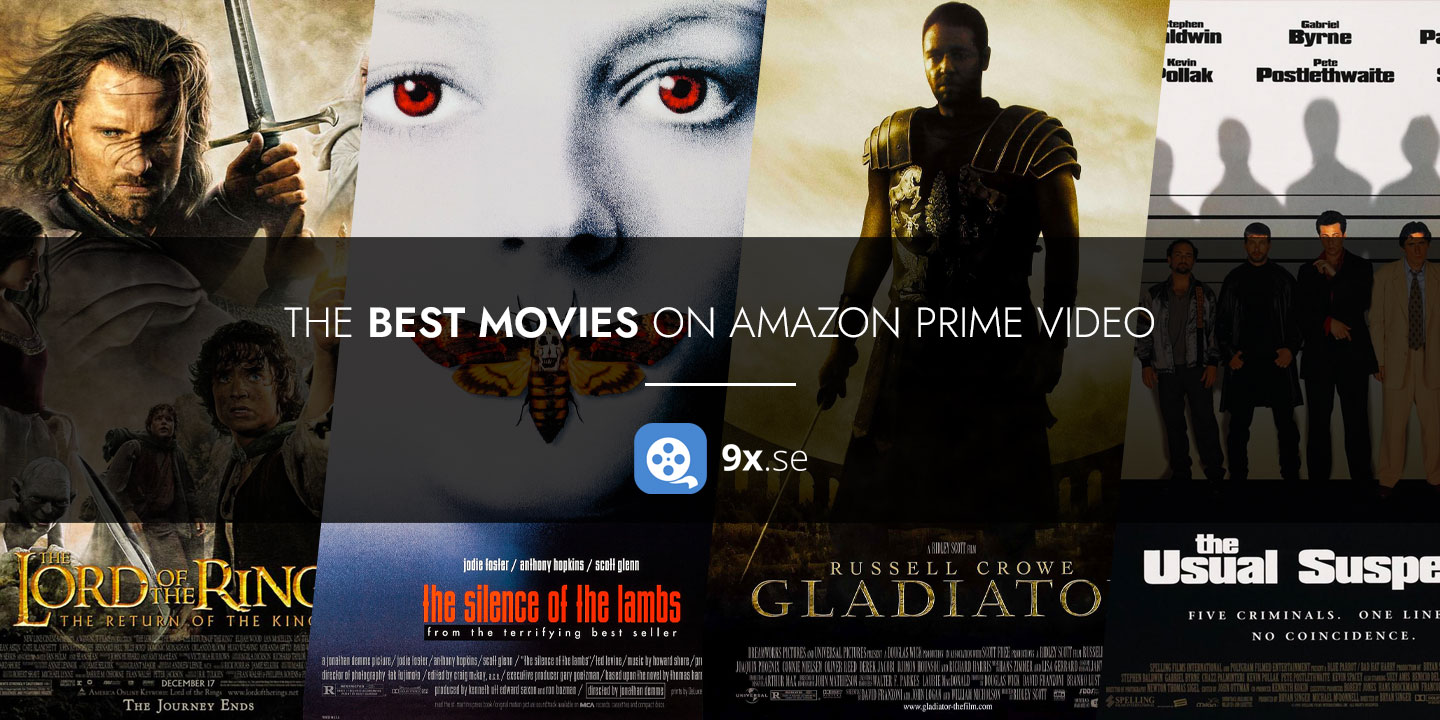 Amazon Prime Video has a great selection of movies to choose from. But, with so many options, it can be hard to know which ones to watch. If you’re looking for some great films to add to your watch list, here are some of the best movies on Amazon Prime Video right now. Whether you’re in the mood for a comedy, drama, or thriller, there’s something for everyone on this list! So get comfortable and get started watching these great films today.

Don’t forget, you get a 30-day free Prime Video trial by following the 9x.se link.

In an effort to exterminate the human race, Sauron’s forces have besieged Minas Tirith, the capital of Gondor. Never before has the once-great kingdom—cared for by a frail Steward—needed its King more urgently. Can Aragorn, however, heed the call of his heritage and grow into the person he was meant to be? The future of Middle-earth is in large part on his broad shoulders.

Gandalf desperately tries to rally Gondor’s broken army to action as the final battle approaches and the legions of darkness gather. He is helped by Rohan’s King Theoden, who rallies his warriors for history’s most difficult test. Even with their bravery and fervent loyalty, the forces of men, even with Eowyn and Merry hidden among them, are no match for the enemies swarming against Gondor.

Despite their losses, they charge forward into the battle of their lives, united by the common goal of keeping Sauron distracted and allowing the Ring Bearer to complete his quest. Frodo, a tiny but determined Hobbit on a perilous journey across treacherous enemy lands to cast the One Ring into the fires of Mount Doom, holds their hopes. The closer Frodo gets to his destination, the heavier his load becomes, and the more he needs Samwise Gamgee. Gollum and the Ring will put Frodo’s allegiances and, ultimately, humanity to the test.

An ancient Ring thought lost for centuries has been discovered and given to a small Hobbit named Frodo by a strange twist of fate. When Gandalf discovers that the Ring is the One Ring of the Dark Lord Sauron, Frodo must embark on an epic journey to the Cracks of Doom to destroy it. He does not, however, travel alone. Gandalf, Legolas the Elf, Gimli the Dwarf, Aragorn, Boromir, and his three Hobbit friends Merry, Pippin, and Samwise accompany him.

The Fellowship of the Ring must travel through mountains, snow, darkness, forests, rivers, and plains, facing evil and danger at every turn. Their quest to destroy the One Ring is the only way to bring the Darkness to an end.

Sauron’s forces grow stronger. His allies expand. The Ringwraiths reappear in an even more terrifying form. Saruman’s army of Uruk-hai is ready to attack Aragorn and the people of Rohan. However, the Fellowship has been shattered, and Boromir has died. Frodo and Sam march unprotected into Mordor for the last glimmer of hope. Aragorn, Gimli, Legolas, Pippin, and Merry form a new alliance to defend Rohan and attack Isengard. Despite this, Sauron’s armies are massing toward Gondor, as the War of the Ring is about to begin.

“Buffalo Bill” (Ted Levine), a psychopath, is kidnapping and murdering young women across the Midwest. The FBI sends trainee Clarice Starling (Jodie Foster) to interview a demented prisoner who may provide psychological insight and clues to the killer’s actions, believing that it takes one to know one. Dr. Hannibal Lecter (Sir Anthony Hopkins) is the prisoner, a brilliant, murderous cannibal who will only help Starling if she feeds his morbid curiosity with details from her own complicated life. This twisted relationship forces Starling to confront not only her psychological demons, but also a demented, heinous killer; an incarnation of evil so powerful that she may not have the courage, or strength, to stop him.

George Bailey has dedicated his life to serving the people of Bedford Falls. He has always wanted to travel but has never had the chance due to the rich skinflint Mr. Potter’s attempt to take over the entire town. All that stands in his way is George’s modest building and loan company, founded by his generous father. On Christmas Eve, however, George’s Uncle Billy misplaces the company’s $8,000 while intending to deposit it in the bank. Mr. Potter discovers the missing money and conceals it from Uncle Billy.

Later that night, when the bank examiner discovers the shortage, George realizes he will be held responsible and sent to jail, and the company will fail, allowing Mr. Potter to take over the town. He considers suicide, thinking that his wife, Mary, their four children, and others he loves would be better off without him. However, his loved ones’ prayers result in his guardian angel, Clarence Odbody, coming to Earth to assist him, with the promise of earning his wings. He demonstrates what life would have been like if he had never been born.

In Gladiator, victorious general Maximus Decimus Meridias has been named keeper of Rome and its empire by dying emperor Marcus Aurelius, so that rule might pass from the Caesars back to the people and Senate. Marcus’ neglected and power-hungry son, Commodus, has other ideas, however. Escaping an ordered execution, Maximus hurries back to his home in Spain, too late to save his wife and son from the same order. Taken into slavery and trained as a gladiator by Proximo, Maximus lives only that he might someday take his revenge and fulfill the dying wish of his emperor.

The time soon comes when Proximo’s troupe is called to Rome to participate in a marathon of gladiator games held at the behest of the new emperor, Commodus. Once in Rome, Maximus wastes no time in making his presence known, and is soon involved in a plot to overthrow the emperor with his former-love Lucilla, Commodus’ sister, after whom he lusts, and also the widowed mother of Lucius, heir to the empire after his uncle, and democratic-minded senator, Gracchus.

Roger ‘Verbal’ Kint is questioned by US Customs Agent Dave Kujan after a number of people are killed and a cargo ship is set on fire. Verbal begins to tell them what happened, hesitantly at first, beginning with when he met four men, all criminals, sharing a holding cell for a few hours. They band together to successfully hijack a jewel shipment and flee to Los Angeles. A lawyer, Kobayashi, representing the feared international criminal Keyser Söze, contacts them and asks them to do a job for him. As a result, the cargo ship is attacked. Verbal is set free after refusing to testify in the case. Only then does Kujan realize what has occurred.

Leonard Vole is an unemployed inventor, and his most recent invention is a fancy egg beater. He is married, but through a chance meeting, he became friendly with a wealthy widow named Emily French. When Vole is charged with her murder, his solicitor refers the case to Sir Wilfrid Robarts, a brilliant barrister who will lead the defense. Robarts believes his client is innocent, but his alibi is based on Christine Vole’s testimony. He decides not to call her as a witness because the jury would expect a wife to defend her husband. He is taken aback when she is called as a prosecution witness.

As luck would have it, he obtains letters that severely undermine her testimony. However, a far more nefarious plot is being hatched, one that even the great Robarts cannot comprehend.

The life of Bronx resident Jake LaMotta’s professional middleweight boxing career from 1941 to the mid-1950s is dramatized, as is his immediate post-boxing life. Jake has been managed by his brother Joey LaMotta for the majority of his boxing career, and his goal is not only to get the title fight at almost any cost – the one thing he is unwilling to do to demonstrate that he is the best and in his “my way or the high way” mentality is to be knocked out, even if it is for a longer-term benefit – but also to have the most fame possible, which means the improbable fantasy of becoming a heavyweight.

While he is not managed by them, his and Joey’s mafia connections have an impact on much of his career. Despite his boxing prowess, Jake must overcome his disagreements with what the mafia wants and his own brutish behavior, which spills over into his personal life in order to achieve his own personal goals. That personal life is mostly shown during his second marriage to Vickie LaMotta, a girl he met in the neighborhood. Their relationship is characterized by jealousy and paranoia on Jake’s part, who believes Vickie is sleeping with every man to whom she pays attention, feelings that lead to emotional and physical abuse.

Jordan Belfort founded the brokerage firm Stratton Oakmont with his partner Donny Azoff in the early 1990s. Their company quickly expands from twenty to more than two-hundred and fifty employees, and its reputation in the trading community and on Wall Street grows exponentially. So much so that companies use them to file their initial public offerings. As their status grows, so does the amount of substances they abuse and the number of lies they tell. They attract attention like no other, throwing lavish parties for their employees when they win big on high-stakes trades.

As a result, Belfort is featured on the cover of Forbes Magazine, dubbed “The Wolf of Wall Street.” With the FBI on his tail, Belfort devises new ways to conceal his activities while watching his fortune grow. Belfort eventually devises a plan to hide their money in a European bank. But, with the FBI on his tail, how long can Belfort and Azoff keep their elaborate wealth and luxurious lifestyles?

Manco (Clint Eastwood) is a bounty hunter on the trail of El Indio and his gang. During his hunt, he meets Colonel Douglas Mortimer (Lee Van Cleef), another bounty hunter, and they decide to work together to track down the bad guys and split the reward. There will be a lot of bullets and funny situations during their adventure. Finally, one of the bounty hunters reveals the true purpose of his hunt.

The indestructible cyborg-assassin known as the “Terminator” is sent back from a dystopian 2029–where the cold machines have conquered the entire world—to 1984 Los Angeles to begin his lethal mission to kill humanity’s most important woman: the unsuspecting Sarah Connor. However, from the same war-torn post-apocalyptic future comes a battle-scarred defender—Kyle Reese, a courageous soldier of the human Resistance Army—determined to stop the cybernetic killer from eliminating the world’s last hope. But the Terminator has no feelings, he doesn’t sleep, and most importantly, he won’t stop until he completes his dreadful task.

Does our future lie in our past?

Do you feel that we left anything out? Leave us a comment below, and as always, thanks for reading!